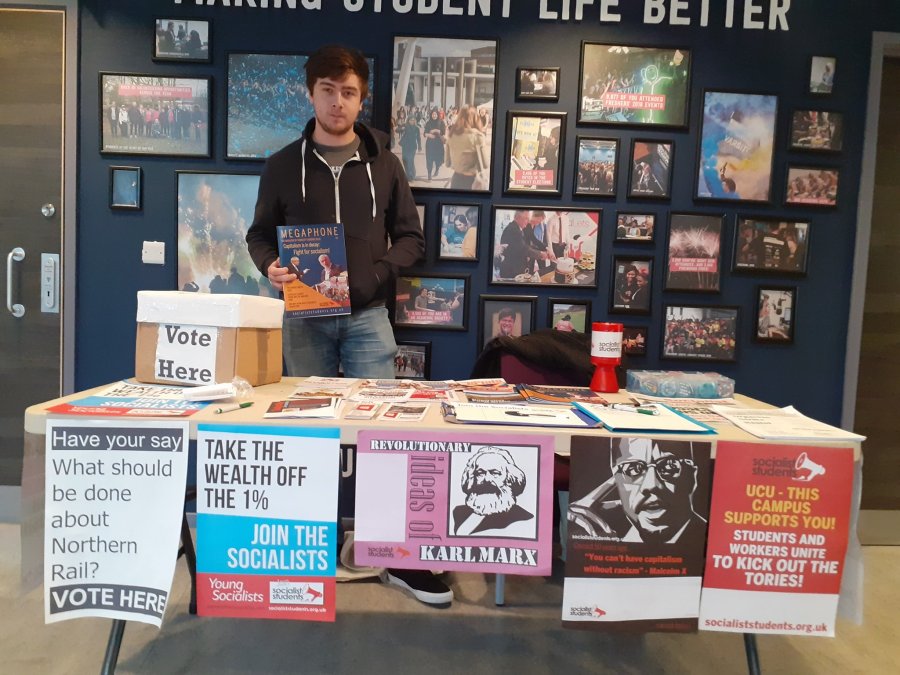 University of Huddersfield’s political societies have been long inactive for a few years.  But since September, Socialist Students has been doing fortnightly stalls at Huddersfield University and also in the town centre. Before Christmas, we were out campaigning on campus for a Corbyn government with socialist policies, and although not every person we met committed to joining Socialist Students on the spot, many were interested in coming to our meetings to discuss socialist ideas with us.

During that time, we have held meetings about the election and how we can organise on campus to fight the Tories, and those who came to the meetings were keen to get involved with Socialist Students locally. Eventually, we gathered enough momentum to become an officially registered society at the university, reflecting the roots we’ve managed to sink in a short space of time on the campus.

After the results of the election, interest in Socialist Students has noticeably increased, and after our first stall in the university SU we had a lot of students talking to us, signing up to Socialist Students, and buying our badges.

On our stall at this year’s refreshers fair, we decided to campaign on the renationalisation of the railways and transport systems; with around 60% of students at Huddersfield University commuting from home, the issue of affordable fares is incredibly important to working class students. .

Students agreed that it should be renationalised, but it was interesting to discuss how it should be done. After discussion, many students agreed and voted that current management should be replaced with workers’ democracies, by nationalising the railway service under the democratic control and management of the railway workers and rail users Some students weren’t aware that the railways were privatised, and their interests were sparked knowing that their commutes could be much cheaper as many commuters got little or no student maintenance loans.

Although initially the progress of building Socialist Students was slow here in Huddersfield, eventually our momentum increased, and we now have students contacting us showing interest in joining the society and even more coming along to our meetings. After the election many students have come to realise that action is needed against Johnson and the Tories, and we will continue to fight against them.