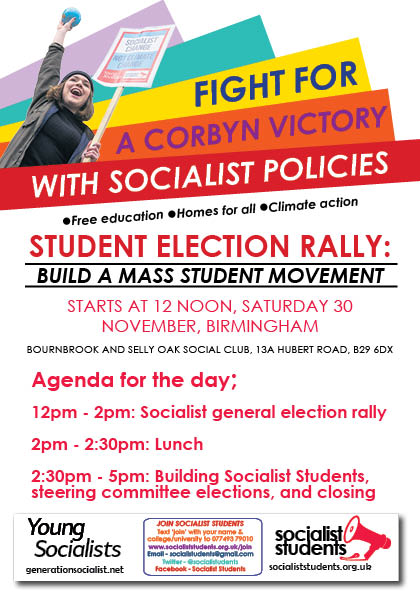 On Saturday 30 November in Birmingham, Socialist Students will be hosting the country’s biggest and boldest student election rally. We want to bring together campaigners and activists from campuses across the country to discuss how we can build a mass student movement that fights for a Corbyn led government armed with a socialist programme, and how we prepare now to defend such a government from capitalist sabotage.

BOURNBROOK AND SELLY OAK SOCIAL CLUB, 13A HUBERT ROAD, B29 6DXThe social club is located just off the Bristol Road (the A38). There is free parking outside the venue if you are arriving by car or by minibus.

How to get there

At a time when a general election is taking place, and students are discussing how to fight for free education, affordable student housing, and a decent quality of life after university, serious attacks on democratic rights on campuses across the country are being perpetrated.

This includes the outrageous scandal of the blanket banning at Bradford University of all political societies by the Students’ Union.

This is in addition to news that at Sussex University the Student Union has banned students and societies from either campaigning or canvassing on campus during the election period.

Meanwhile at Southampton University, the Students’ Union has instructed societies that they will have to abide by a decision of the SU’s AGM on whether or not to support UCU strikers, or face being de-recognised as official societies.

These represent nothing other than a blatant attack against the right to free speech and the rights of students to organise, campaign and protest on campus.

At the same time, there is a huge fight back taking place in our society. University staff on campus are taking eight days of strike action between 25 November and 4 December against the bosses attacks on their pay, workload and pensions.

Meanwhile, students on campuses, as well as in schools and colleges, and young workers also, are discussing what is the best way to kick out the Tories at this election, and what kind of policies and programme a Corbyn led government needs to adopt to end austerity once and for all and fight for a future for young people.

These attacks against democratic rights are designed to undermine the efforts of staff striking back against austerity and marketisation on campus as well as students looking to fight to kick out the Tories.

Socialist Students demands that all of these anti-democratic attacks banning students from campaigning on campus are immediately reversed.

We also demand and campaign for the transformation of students’ unions into organisations which fight for students’ rights, alongside the restoration of democracy within all Students Unions, including the re-establishment of regular, all student general meetings organised by the local students union.

Socialist Students welcomes the announcement from the University and Colleges Union (UCU) that staff from 60 universities will be taking eight days of strike action from Monday 25 November until Wednesday 4 December. This fantastic result demonstrates the potential for unions to smash the draconian Tory anti-union laws.

Socialist Students will not only be out on the picket lines supporting our striking university staff, but will be reaching out to local UCU branches on campus over the approaching weeks to build joint student and staff meetings to discuss with the UCU how we can best build student solidarity with the strikes.

In 2018, management of universities tried to weaken and demoralise strikers by pitting students against them. We say that staff are going on strike not only to fight against vicious attacks to their pay, conditions, and pensions but to defend our education from Tory cuts and attacks! That’s why it’s vital students support the UCU in their struggle.

These strikes, alongside the upcoming industrial action to be taken by CWU members working for Royal Mail, come at an extremely important time. Falling in the middle of the general election campaign period, these strikes have the potential to lead the way in the struggle against the Tories, and embolden students and workers to fight for a Corbyn led government with a socialist programme which will fight the bosses to the end and end austerity.