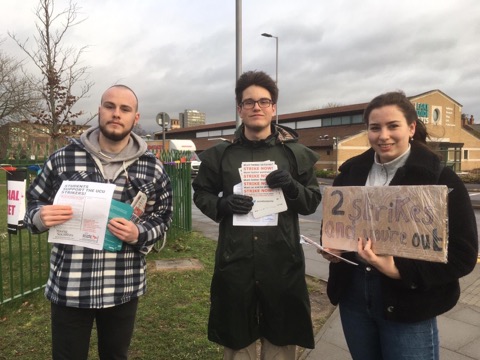 This morning, in grim and rainy conditions, members of Socialist Students and other left-wing student organisations joined UCU strikers on picket lines. Despite the early start and the rain, spirits amongst staff and students were high. After pickets ended, the various picket lines from the main campus entrances and other campuses came together by the lake, opposite the building of the Vice Chancellor and other higher management positions. Here, we heard speeches from union reps, students, workers and the Labour MP Nadia Whittome.

It is time for students to coordinate action with striking staff, as our struggles against casualisation, the commodification of education, and attacks on trade unions is a struggle against the same enemy: the capitalist class. The trebling of tuition fees, which came alongside a cut in government funding to universities, has taken its toll on university workers and students alike. On the one hand it has meant increased workloads and attacks on pay, pensions and conditions for staff, while on the other it has meant student debt, spiralling housing costs, and cuts to courses and student services for students.

This strike could be a significant step towards building a united student and worker struggle that fights for the abolition of tuition fees, for the end and reversal the marketisation of higher education, and for a fully funded education system where the objective is the pursuit of knowledge rather than making profit. Join your lecturers, admin staff, and support workers on the picket lines, and let’s build a movement to resist Tory austerity and defend our right to protest on the campuses!